WHAT IS SILBERKUPPE?
In the course of two years Silberkuppe has become one of Berlin’s most outstanding independent spaces for contemporary art. The micro-space occupying just 25 square metres in what was formerly a concierge’s office, is run by Dominic Eichler and Michel Ziegler, who since May 2008 under the name Silberkuppe, have hosted a succession of lectures, exhibitions, presentations, film screenings, concerts and performances. Silberkuppe works with an international range of visual artists and other actors on the cultural scene. Their projects often have wide scope, crossing the boundaries between generations, artistic media and modes of expression. Silberkuppe’s approach to the field of art is all about challenging established forms of presentation and mediation as well as exhibition conventions. Against the background of the widespread enthusiasm for Silberkuppe’s activities and their approach to the field of art, Eichler and Ziegler were invited by four European art institutions to mount projects outside Berlin. For Silberkuppe this has led to a defacto ‘European tour’ that culminates with the major group exhibition Under One Umbrella at Bergen Kunsthall. In the last year, through three very different exhibitions at Staatliche Kunsthalle Baden-Baden (7 × 14: Silberkuppe takes the waters, 2009), Hayward Gallery Project Space (Rooms without Walls, 2009) and Museum für Gegenwartskunst Basel (Old Ideas, 2010), Silberkuppe has had the opportunity to implement projects with dozens of artists. Their curatorial intention was to examine what they see as some key concerns in contemporary art, for instance: the terms, conditions and methods of both art and context production; the use of reference and historical sources; conceptions and various strategies of engagement with the viewer; conventions of exhibition making including display formats, timing and modes of mediation; and the relationship between what are sometimes presented as contrary strands such as ‘conceptual’, ‘formal’, ‘material’ ‘political’ based approaches to art making. Typically Silberkuppe’s exhibitions distinguish themselves through the artistic, discursive and aesthetic heterogeneity they allow.

UNDER ONE UMBRELLA
The exhibition Under One Umbrella brings together works by artists, an architect and a designer, some of which were made possible as a result of Silberkuppe’s institutional excursions and others which were especially produced or selected for this exhibition. The title of the exhibition acknowledges a certain amount of playful absurdity involved in gathering many different cultural producers and their works under one umbrella. Imagining the closely interwoven social space under the umbrella as a metaphor for a contextual model and space for the production of informal discourse, is one of the subplots to the exhibition. The exhibition opens in the midst and in a sense behind the scenes of the sculptural installation SPLIT (2010) by British sculptor Phyllida Barlow. For Barlow the two large components of the work – a stack of four bolsters and a free standing painted grid frame are ‘all inside and all outside’ respectively. The work of Barlow – a renown art educator and an artist’s artist – has drawn on vernacular form and colour from building sites and the streets of London since the 1960s. The marks on her frame are systematic rather than loaded gestures. The brush strokes indicate ‘work’ and function to simply cover all the timber joints and fastenings. Barlow’s camouflage painting on an irregular grid demonstrates her conviction that ‘if you hide a structure you make it obvious’.

The series of rooms to the left and right of the Kunsthall offer alternative and various spaces and paths with two possible endings. To the immediate left is a suite of works by Kirsten Pieroth, which draws on documentation and anecdotes relating to Italian inventor Guglielmo Marconi’s (1874-1937) experiments with wireless communication in the 1890s. Pieroth’s work adds playful twists on both the historical record and the tradition of conceptual art within which she works. The ‘document’ is no longer a reliable record, her models are also humorous mini-sculptures and two ends of a sofa transmit electric static to each other bridging the distance between them. Pieroth’s continuing interest in inventors and their studios also makes her works as an analogy about artists – how they work and their creative process which might be full of stops and starts, setbacks and periods of rest or inaction. The idea of communication tools is picked up in the useable seating platform based on designs from the 1950s and 1960s by designer Janette Laverrière in the main space. This piece has accompanied Silberkuppe in the last three institutional exhibitions and for them represents a utopian social space where viewers are brought eye to eye on one level. It also functions as a viewing oasis and delineates a conceptual space for informal discourse.

Nearby a tent, the Kunsthütte (2009/10) by Etienne Descloux PE-P is another proposal for a possible form for an art and dialogue space. Silberkuppe commissioned the architect to design an idealized freestanding space for a multi-disciplinary and multi-media project room for contemporary art. His proposal was for a freestanding metal tent. In the exhibition it represents an autonomous space within the institutional space and is used for daily screenings of video documentation of lectures, talks and performances mounted by Silberkuppe over the last 2 years. Continuing and expanding the various overlapping and superimposed notions of ‘space’ in the exhibition are three works: Kaucyila Brooke´s drawing simply listing names of former lesbian bars in San Diego. For more than two decades Brooke’s work as an artist, activist, writer and project initiator has dealt openly with lesbian identity and experience. Christian Philipp Müller’s work Untitled (1993/2005) documents the artist walking illegally across the borders of Austria to it’s neighboring nations. These crossings were made as a part of the piece Green Border for the Austrian pavilion at the 1993 Venice Biennial. For that year’s biennial Müller was invited together with Andrea Fraser as non-Austrian artists to take part in the national pavilion. Müller’s contribution continued this opening up of institutional and national borers, by following Austria’s green borders, and crossing over to neighboring countries, both in the east and the west. Also in the main space is an instruction piece by Anonymous. Her wall text invites the viewer to render themselves radically vulnerable.

At either ends or extremes of the exhibition are alternative proposals about relationship to art, artist biographies and mental journeys. To the far left is Shahryar Nashat’s video Today (2010). This work was commissioned for the Silberkuppe exhibition ‘Old Ideas’ in the Museum für Gegenwartskunst Basel and was shot with the installation staff in the storage and in the conservation department’s photographic studio of the Museum. The main ‘protagonists’ of the two part film are sculptures by a once widely known Swiss sculptor Karl Geiser (1898 – 1957) which are usually never shown. The work is a musing on the status of art in a collection but not on display, transition and photographic reproduction. At the other end behind a wall in a space which is nearly exactly the same size and shape as Silberkuppe’s rooms in Berlin is Juliette Blightman’s video installation. The video documents a recent family visit to the Getty Museum in Los Angeles and a view of a 19th Century painting through a cloud. Her installation requires the use of old furniture in the host institution’s inventory and invites single viewers to spend the last hour of each day of the exhibition with the work. Nearby Dirk Bell’s ensemble of three works above the tent – a sign of love – and inside the tent – a paired on and off pulsing light and a painting behind the screen demarcate an imaginary space beyond architecture.

For the exhibition at Bergen Kunsthall a catalogue will be produced together with Sternberg Press. This publication will include a photographic ‘report’ from Silberkuppe’s last two years of activities as well as artist texts and project descriptions. 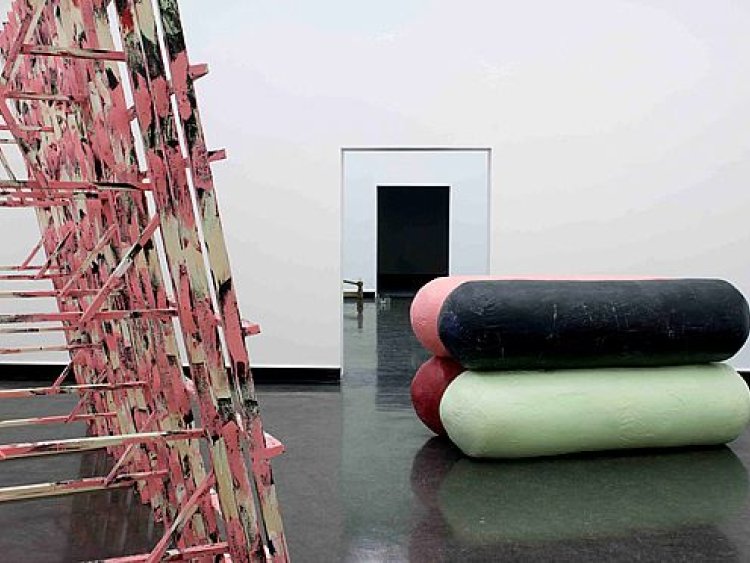 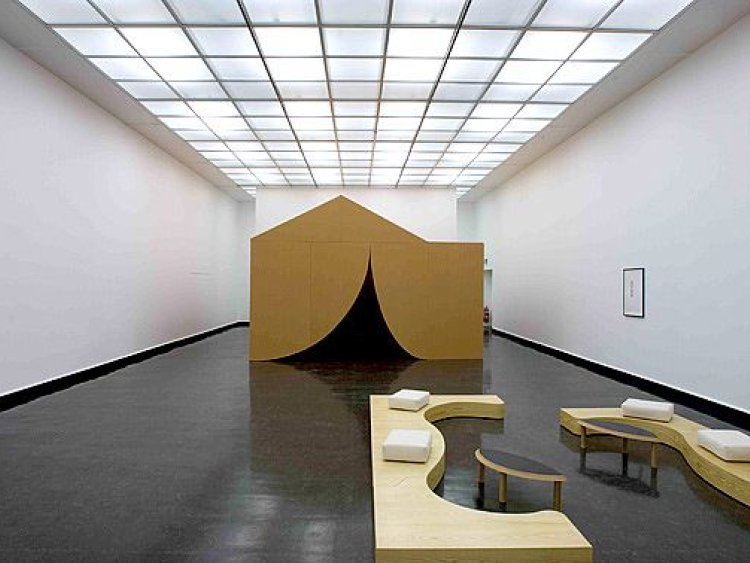 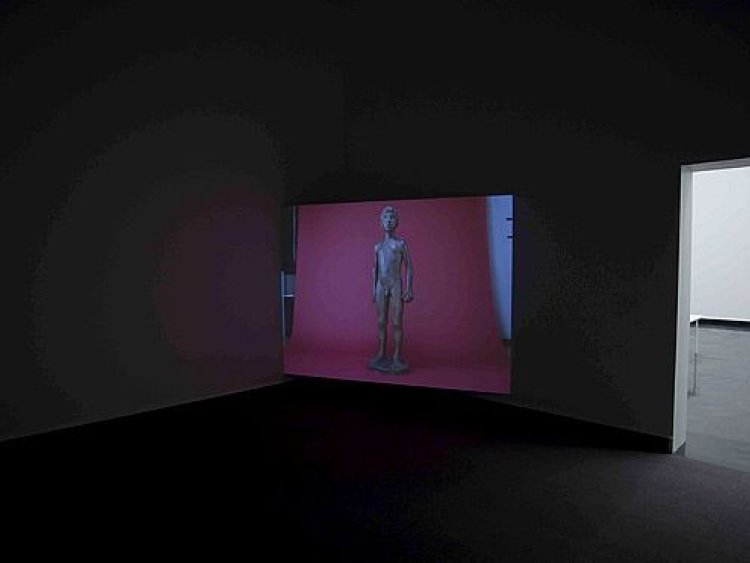 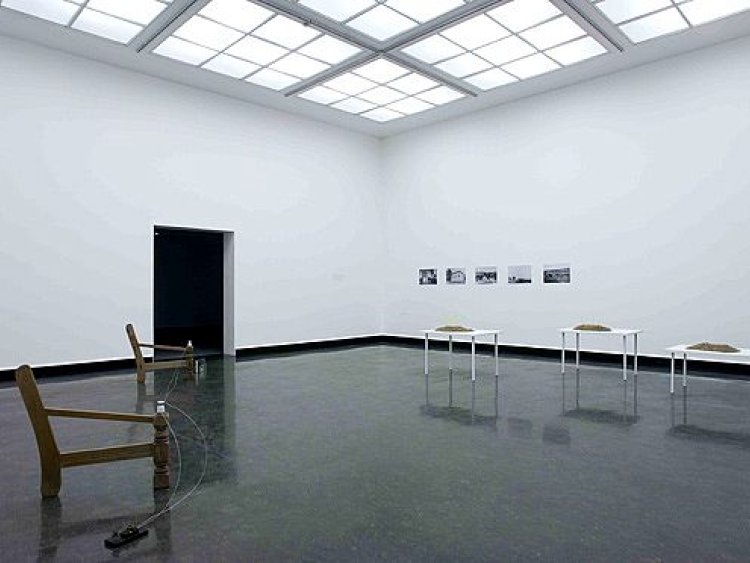 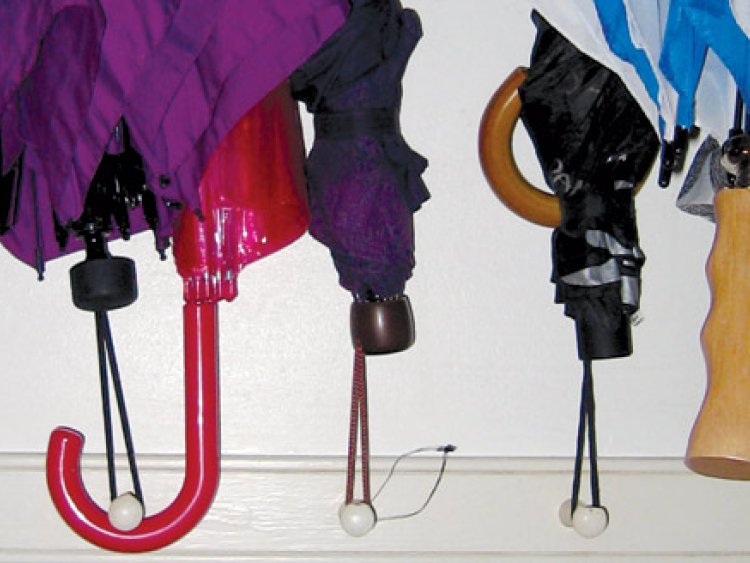 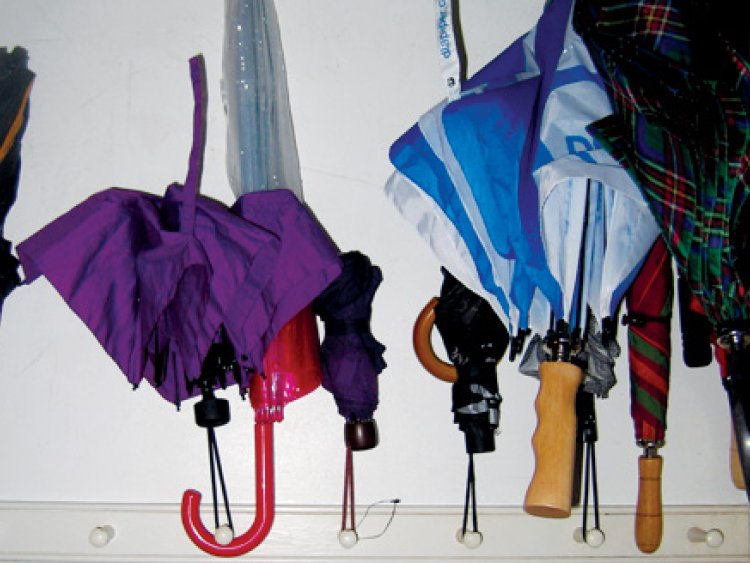